The Spanish coin of 8 Reales 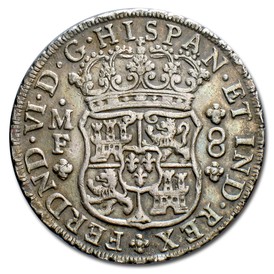 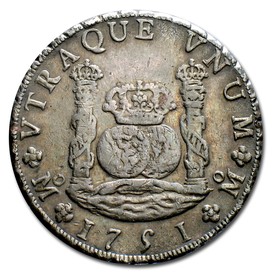 The silver coin of "eight reals" (also known as Spanish dollar) was coined in the Spanish Empire after the monetary reform in 1497.  Made with many different designs in the next century in various Spanish and American mints until the nineteenth century, it had a great success also outside the Spanish borders and its colonies. It had legal tender in United States until the issue of the Act of Congress that abolished it in 1857. The large spread in Europe, in Americas and in Far East, made it the first world currency at the end of eighteenth century. Many circulating coins, as the Canadian dollar, the United States dollar, the Chinese yuan, the Philippine peso and most of the Latin American coins were initially based on "8 reals" coins. The slang term "peso" used to refer to this coin became the name of many national moneys of the Spanish ex-colonies such as Argentina, Chile, Colombia, Costa Rica, Cuba, Dominican Republic, Ecuador, Guatemala, Honduras, Mexico, Nicaragua, Paraguay, Philippines, Puerto Rico, San Salvador, Uruguay and Venezuela. In Asia was dominant a monometallic system based on silver; in fact, for small and large transactions, in Far East were used these silver coins. The piece of "eight reals" - also called "Pillar Dollar" for the presence of the Pillars of Hercules in some of its exemplars - arrived in Asia, through the colony of Philippines, where Spaniards bought goods from Indonesia, China and other Asian regions paying with this money. This fact is testified by coins today still numerous, with many Chinese counterstamps evidencing their intrinsic goodness. The Danish East India Company also used and then copied this coin.