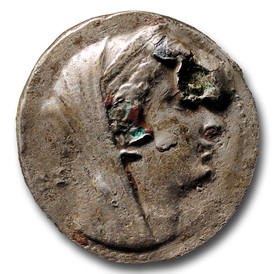 With the birth of coins appears immediately  also the money falsification. At the Cabinet des Médailles in Paris is preserved an archaic Miletus plated hekte of electro. The writer of this article had the opportunity to study and publish a silver stater minted at Thera in 525 B.C., plated with the same technique of roman plated denarii (silver foil on blood copper). The same writer found a similar plating on archaic incuse staters of the sixth century B.C. from Metaponto, Crotone and Caulfiel; these coins required an incredible dexterity to the counterfeiters (private or state ones) because of the large and thin form of the blank and of the double impression relief/recess. Even having doubts about the veracity of the story, Herodotus tells us that Polycrates - the tyrant of Samos besieged in his island in 525/524 B.C. by Spartans - would rescue himself paying Lacedaemonians with gilded lead staters (Herodotus. Stories, III, 56, 2). This fact seems to be unbelievable, as it looks like an anecdote about the subtle astuteness of Greeks of Asia opposed to the militaristic simplicity) of Spartans.  Despite this fact, some of the famous gilded lead staters (now devoid of browning, but having an indisputable authenticity) came down to us (Colin M. Kraay, Archaic and Classical Greek Coins, p.30, table 3, nos. 68, 69). Even during the Classical and Hellenistic period were issued plated coins by different mints and many times they were of evident state production. We mention two examples: the many plated tetradrachms (issued by the mint of Athens during the last dramatic phase of the Peloponnesian War) or the silver coins of the Macedonian king Pausanias (all plated except very few exemplars). We want to focus just on the roman republican and on the early Empire eras, a period where the plating phenomenon of silver denarii gained in importance. In fact, many experts gave special attention to these phenomena, also because of the historical and economic implications. 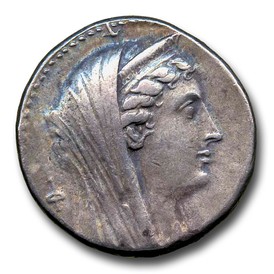 The fact that plated denarii were largely produced by the state, and not by private counterfeiters, is now established without any doubt. Pliny the Elder noted this fact in two passages referring to the late republican period; in these passages we don't have any interpretation doubt (Pliny, Natural History, XXXIII, 13 and Pliny op. Cit. XXXIII, 46).  This fact is accurately attested above all by the quality of the work and by the respective technical complexity of the same plating process, in addition to the employment- sometimes - of the same coinages used to produce "good" coins. It's not believable  that counterfeiters - forced to work in clandestine shops with the constant fear of being discovered - applied themselves in a technically sophisticated producing as the one of   the most part of plated coins. Obviously there are also some fakes of ordinary invoice: sometimes the obverse and the reverse of different ages are associated, other times they present gross errors in the legends. These denarii are certainly the result of the work of private forgers, but the general appearance and the poor quality distinguish them from the "official" issued ones. However, the status fake even after this era always existed, sometimes mixing them artfully with the good coins of the same state that issues fakes, sometimes falsifying or forging coins of others. The purpose could be the pure and simple fraudulent gain or the intent to destabilize the currency of others for political or war goals. In this respect, we can mention the Genoese low gold falsifications  -issued to damage the international prestige of Venetian pure gold ducats; the myriad of falsifications issued for pure profit by many feudal lords of the seventeenth century in Italy;  the gold platinum 20 francs coins of Napoleon the III (at that time this platinum was worth much less than gold); finally the perfect fake pounds sterling, banknotes printed in millions exemplars by Germans during the Second World War in order to destabilize the enemy currency. 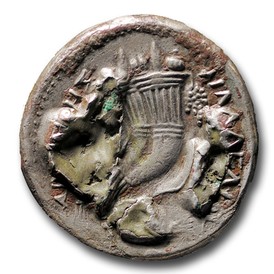 What was the technique used to plate roman denarii, at least the safe state issue ones? In 1965 Bernareggi researched a metallographic deep investigation on 16 roman republican denarii of safe official coinage and of state issuing, distributed with balance throughout the last two centuries of the roman republican coinage. He could establish incontrovertibly the plating process of a coin (Bernareggi E., Nummi pelliculati in Rivista Italiana di Numismatica, Vol. XIII, fifth series, LXVII, 1965, pp. 5-31. For further bibliography about this theme see the same article. See also Finetti Angelo, Numismatica e tecnologia, 1987, pp. 42-45). Without giving extra details about complex technical and scientific analysis that anyone can deepen in the Bernareggi's article, we can summarize the procedure as follows: a pure copper blank - obtained with fusion and having shape and weight wanted - was polished in order to obtain a glossy surface, like a mirror, free of oxides. On this little disk was manually applied - with a mean of cold compression - a thin pure silver layer prepared in advance, making sure that it perfectly adheres to the copper blank to prevent that air (that is oxygen) penetrated between the silver layer and the blank with the consequent formation of copper oxides. The so covered disk was placed with others similarly prepared in a container and it was heated to join the melting point of silver that, liquefying, wrapped uniformly the below copper blank like a frosting with no cracks or burrs. Silver melts at 960.5 degrees, while copper melts at 1083 degrees.
When the silver was melted, also the below copper began to soften on the surface: for this reason, this process determined the formation of an intermediate subcortical zone of crystals  mixed of silver and copper. The melted silver tended to flow slowly thickening at the bottom: in this way the covering thickness was a little bigger at the bottom of the coin.  Solidified in cooling, silver still remained perfectly and uniformly adherent and almost soldered to the copper disk due to the interpenetration of the two metals in their contact zone. 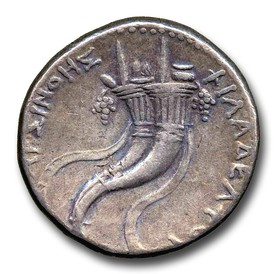 During the cooling, with a relatively low temperature, the following step was the coinage whose strong percussion compacted further the two components of the coin. Due to this sophisticated technique it was possible to obtain false coins with a very strong silver cover. The writer saw more than once plated coins come down to us after two thousand years, with their still intact coverage; their true nature can be detected only through the weight (copper has a lower specific weight than silver). You might ask at this point what kind of economic moderateness could have State in creating fakes of complex manufacturing, to save after all about 3 grams of silver, replacing them with a weight of copper just lower. Today the high cost of labour, the relatively high cost of copper and the relatively low cost of silver would make a similar operation totally uneconomic. In the ancient world instead the situation was different: the slave labour was plentiful and it didn't cost anything and silver was more valuable than copper than today. The only modest expense was the warming of metal until the melting point of silver. Therefore the production of plated coins in the roman world was a very profitable operation. The production of silver plated coins continued with greater or lesser intensity in the imperial era, but it became sporadic at the time of Commodus and ended definitively during the Caracalla era, when the progressive deterioration of the silver alloy removed any economic advantage of plating.
With regards to the gold coins, the presence of plated exemplars (apparently made with a different technique) is more sporadic and it's mainly concentrated in the last period of the empire. In the politically, military and monetary decay of the era, private counterfeiters probably had an easier freedom of action, even if the exemplars come down to us should be more thoroughly and systematically studied to try to establish their probable state or private origin.