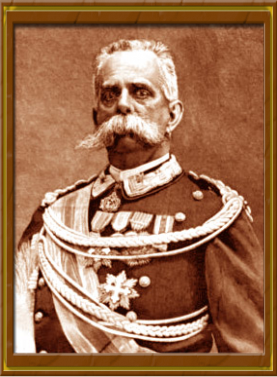 Humbert Ranier, Charles Emmanuel John, Mary, Ferdinand, Eugene of Savoy, first son of Victor Emmanuel II, at that time still King of Sardinia, was born in Turin on March the 14th  1844. As tradition, he was groomed for the military career still young. He took part in the Second War of Independence. He also fought in 1866, again against Austria. He obtained the gold medal for military valour for his conduct in Villafranca. In 1866, he married the Princess Margaret in Turin, destined to become the first queen of Italy. Due to this union in 1869 the Prince Victor Emmanuel was born. He would arise to the throne as Victor Emmanuel III. He was the only son of the couple. When the father died in 1878, Humbert arose to the throne with the difficult task of replacing a figure - the first king of Italy- that became forcefully the "Father of the Nation" in the popular imagination. This explains the need to make himself known as much as possible. During the all reign he travelled, supported by his wife, in each Italian region. He  obtained always a widespread success in part due to the charm of the queen. Being a man of uncommon courage, he wanted to be always present in areas affected by natural disasters or epidemics. He went to Naples in 1884 during a cholera epidemic that struck the town, visiting all the city hospitals. He went to Veneto for the Adige flood, to Casamicciola for the earthquake that devastated the town, to Busca, again during a Cholera epidemic. As a conservative he endorsed the colonial ambitions, in particular of the Crispi government, trying to bring prestige to the country. In foreign policy he was in favour of the rapprochement with Germany and Austria, mainly in anti-French operation. During the difficult years of the end of the century - characterized by social risings not only in Italy - there was the imposition of the state of siege in several provinces.
The clashes in Milan of May 1898 were dramatic because the troops bombarded the crowd. The King's decision of granting an honour to the General who led the repression was very criticized. On July the 29th 1900, during a sportive event at Monza, the King was assassinated by the anarchist Gaetano Bresci. Already victim of three attempts during his Reign, he used to wear a steel coat under the shirt that, however, he didn't have on that night due to the torrid weather. His death struck the public opinion, that was used to call him the "Good King". He was buried in the Pantheon of Rome.
Franco Ceccarelli