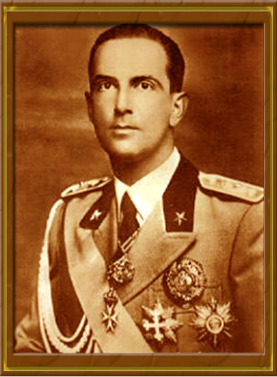 On June the 4th 1944 the American troops arrived in Rome. Rome was the first European capital to be liberated from Germans. The following day the King Victor Emmanuel the III, according to the agreements with the government, delegated his constitutional powers to his son Humbert, Prince of Piedmont. He named him General Lieutenant of the Reign with Royal Charter 140/44 of  June the 5th 1944. Lieutenancy was a constitutional instrument, as contemplated in the Albertine Statute. It was already used by Victor Emmanuel the III during the  First World War when he left Rome to go to the front, appointing his cousin, Thomas of Savoy and Duke of Genoa, Lieutenant from 1915 to 1918.
The Lieutenancy of Humbert represent  a very troubled period in the Italian history. In spite of all, in this two years took place some fundamental reforms for the democratic future development of the Country. Already with the Lieutenant Decree 151/44 of  June the 25th 1944, it was established that the future institutional set-up would be decided by people at the end of the war. In 1945 the right to vote was extended to women and with the Decree 98/46 were established the rules for the future institutional referendum.
In the last months of the war - when increasingly large portions of National Territory returned to the Italian administration due to the allies - the Lieutenancy was able to ensure that all the political actions were made in obedience to the constitutional praxis. It was also able to soothe in any way the political passions, struggling the extremisms of each colour. On May the 9th 1946, with the definitive abdication of the King Victor Emmanuel the III, the Lieutenant arose the throne of Italy under the name Humbert the II. He would remain on the throne until the next  June the 15th  when, due to the contested institutional referendum of June the 2nd, he left Italy going into exile in Portugal, where he died in 1983.
Like his father, Humbert was keen about numismatic and a collector too. He was particularly  keen about medals related to his Dynasty. When he died, the important collection - that he had collected since he was young - was given (by his own decision) to the Italian State, in order to complete the enormous Royal Collection donated by his Father in 1946. However he wished that the bequest was given with care before his death, but he also decided that his gesture had to be known only after his death.