The splendour of an ancient Empire is recalled in the Byzantine coins, with its fabulous capital Byzantium, the new Rome re-founded by Constantine following a prophetic dream which revealed the place to build 'his' city.

Although less well known than Roman, Byzantine coins enchant through their representations of Christ, the Madona, saints and archangels, whose static images are reminiscent of Paleochristian frescoes.

Collecting is also reliving the first moments of the Christian spirituality. 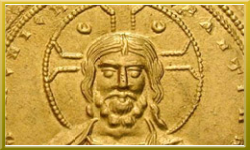 See Byzantine coins in our shop