The Roman woman in the portraits of the Augustae 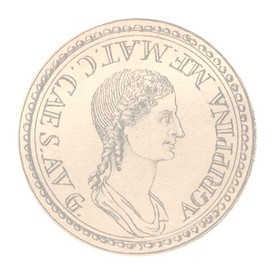 Women of Rome appear in every era as men's partners. They stay close to him during receptions and banquets; they share with him the authority over children and servants. The roman matrons enjoyed the confidence of their husbands: they went out, they visited friends and relatives and they went shopping. In the evening, they accompanied their husbands to banquets and came home late. Since the infantile period, boys and girls grown playing together; they also went to school together, where they learned reading, writing and arithmetic. After completing the initial studies, the girls coming from a good family continued to be educate privately. They studied Latin and Greek literature, learned how to play the cittern, how to sing and how to dance, without forgetting to deal with women's work. In ancient times, the matrons spun with their maids and this occupation was estimated as sign of great virtue. In the last century of the republic, the roman patricians took a step forward towards equality with men, obtaining legal and patrimonial independence. While before they were economically dependent on their father or husband, with the new marriage law they were allowed to conserve and manage independently all the possessions they owned. 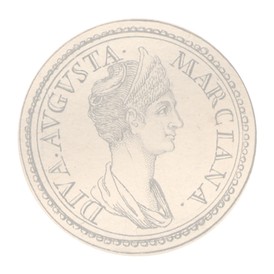 In ancient times, Roman women dressed exactly like men. The Greek and Etruscan influence, however, soon brought a new fashion, exclusively female. The main garment was a clinging shirt, on which they wore a dress and a cape. Eventually, the clothes were adorned with a veil. On the underwear tunic, roman women wore the stole, cut just as the underwear tunic: the only difference was that the sleeves stole, more or less tight, were long up to the forearms, especially if the tunic had no sleeves. To make this garment most precious, roman women dyed fabrics purple-red and they adorned it with pearls and gold brooches. The stole was often stopped on the waist with a belt, which also became a precious ornament. The Roman women could not be considered completely dressed without the veil that, placed in various ways on the head, fell softly on their back and shoulders. Roman women loved gathering their hair in hairnets of gold or silver. The variety of their hairstyles surprises and enchants: from simple plaits and buns of the first Augustae to the most elaborate ones of the Septimius Severus period. 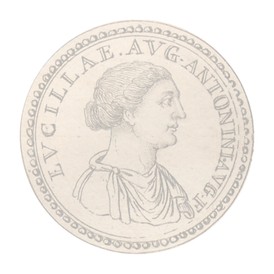 Roman coins - not only as an economic instrument, but also as a vehicle of propaganda that spread widely in the various lands of the empire - represent also an irreplaceable and precious source for reconstruction of the portraits of emperors and women next to them.  Mothers, wives, daughters and sisters participated at the events of a great empire as faithful partners and advisers, sometimes also as bitter enemies.
Historians of the time talk about some of them: in the pages of Tacitus revive the Julio-Claudian women, Livia, Julia, Antonia, the two Agrippina, Messalina, Octavia, Poppaea. Thanks to Suetonius we know the tragic figures of Julia and Domitia. The female portraits handed down to us indelible images of women often of high artistic value. They represent also an interesting example of the evolution of roman portraiture during the imperial era. The same realism characterizing the first century of statuary can also be found in Augustae portraits of the first imperial period. The Augustae are represented as full of life on the coins that Augustus dedicated to them. Through the evolution of Roman portraiture - even if it was a slow evolution - we will arrive to the stylized and massive images of women of the tetrarchical era. 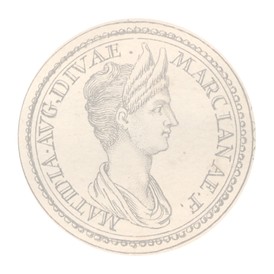 During the empire, the Augustae dictate the hairstyles fashion. Due to coins, the Augustae portraits can reach the most distant places of the empire, getting known to the subjects the hairstyles of the current dynasty. The provincial aristocrats, in fact, pay much attention to the fashion coming from Rome. In the early imperial era, the Augustae hairstyles are simple, but refined. Livia,  Augustus wife, in 39 B.C. wears a hairstyle with a small bun. In the course of the century, however, hairstyles become more complex, using also toupees and hairpieces, made with real hair, which were placed in a ring around the forehead, while a ring of braids wraps the back of the head. During the reign of Nero, the central parting is abandoned and the hair on the front are cut short and arranged into a showy tangle of curls, while the rest of the hair is gathered into two braids stopped by a node. At the beginning of the second century, the hairstyle of women belonging to the Trajan family changes again. Ladies comb themselves using false hair or a braids hairpiece, which takes the form of a diadem on the face. The turban hairstyle is also worn by ladies of the provinces. Since the Septimius Severus period, hairstyle with central parting and very wavy and swollen hair, collected in a bun on the nape, becomes popular. This hairstyle opens the way to the "helmet" one, which was mostly worn by the empresses of the III century A.D. Although we don't know the most part of Augustae form from statues or paintings because they were not handed down, through their portraits on coins it seems that the effigies take shape, discovering the exact facial features from small coins images. Through the coins dedicated to Augustae, it seems possible trace the history of the Roman Empire events from a female point of view.