The Bank of Rome during the Kingdom of Italy 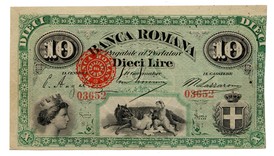 On September the 20th 1870, the breach of Porta Pia determined the end of the temporal power of the Church. It's interesting to note that the first cannon shot  - which opened the breach - was fired by a Jew, because of the anathemas launched by the Holy Father against who wanted to strike with arms the Eternal City. In the banking world, one of the most visible effects of this change was the closing of the Papal States Bank which, according to the Royal Decree of February the 2nd 1870, assumed the new name of Banca Romana. Rather than a closure, it was in effect a "change of ownership": the new Bank of Rome would absorb assets and liabilities and it would be located in the same office, retaining the previous privileges, including the authority to issue banknotes.

Also the capital, consisting of 10 million of lire, remained unchanged, as well as the amount of banknotes in circulation, which should not exceed three times the metallic reserve. Due to the installation of the National Bank of the Reign in Rome in a short period, the Bank of Rome accepted the sum of two million of lire as compensation to renounce to the exclusive right of issuing banknotes in the ex-Papal State territories. Beyond the intentions, at its birth the bank had to resolve soon adventurous operations, started by the past patronage management. For this reason, it wasn't easy to manage its running. Even after an initial attempt of correct administration, the opening credits without adequate guarantees increased, as well as bills of convenience, outstanding payments and other dangerous operations. 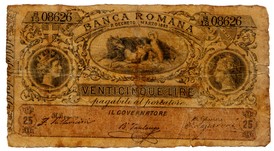 The first Governor of the Bank of Rome was Giuseppe Guerrini, who administered it in an upright manner, according to the statutory rules: he recorded a good start, leaving hope for a prosperous future, when it would be possible to delete the patronage favouritisms that burdened the previous Institute management. Because of the chronic shortage of small coins which, as we know, caused the well-known phenomenon of the illegal divisional circulation, with the Royal Decree of November the 6th 1872 the Bank of Rome was authorized to issue notes with value of 50 cents and of a lira. A few days later, the Royal Decree of November the 29th authorized the issue of new notes in the following terms: "Considering that the Council of Regency of the Bank of Rome decided to replace the old model notes with value of 1.000, 500, 200, 100, 50 and 20 lire, now in circulation, with other new model notes ..." with the values mentioned above.

The following decree of December the 14th authorized the issue of 5 and 10 lire denominations, describing their features. We note that, unlike the other denominations, the 5 and 10 lire notes were created and printed by the American BankNote Co. of New York, that made also a test model of 2 lire note, which however remained in draft form as it was never issued. After the legislative disorder that characterized the first years of paper issues in the new Kingdom of Italy, on April the 30th 1874 was finally passed the first organic law related to the issuing banks. Among other things, it stipulated that the amount of their notes could not exceed three times the deposited capital or the net patrimony. After this provision, the Bank of Rome decided to proceed with the capital increase, that reached 15 million of lire.

After issuing the new law, the government verified the circulation of the six Institutes authorized and it established, with the decree of September the 23rd 1874, the total maximum issue limit both for all Institutes and for each bank. In relation with the recent increase of the social capital, for the Bank of Rome this limit amounted to 45 million of lire. The Governor Giuseppe Guerrini worked always observing this limit and, despite the pressures of associates and directors, tried to prevent that the bank management suffered heavy deficits during the difficult period of the international economic crisis that began in 1873 called "the great depression". Even if the failure of the Bank of Rome were caused, first of all, by the mad administration of Bernardo Tanlongo, the premises of this ruin must be related to the Great Depression, originated in 1873 by the collapse of the Vienna Stock Exchange, whose effects damaged for many years the main financial markets of the Old and New World.

We find useful to mention here these events because some causes originating the Great Depression were essentially very similar to those that generated the nowadays crisis and because its effects significantly influenced the fate of the Bank of Rome. After 1860, the population of the major capitals of Europe began to increase and, since 1870, there was an expansion of the urban construction sector, both private and public, particularly strong in Vienna, Paris and Berlin.  Here this expansion was favoured also by the birth of financial institutions, specialized in providing real estate loans, granted easly and without adequate guarantees, in the wake of continuous price increases. In Italy, after the completion of its Unity, the banking system operating in the Old States was unprepared to feed the development of that industrialization process, which would lead many Italians to abandon the countryside to live in the shadow of factories. 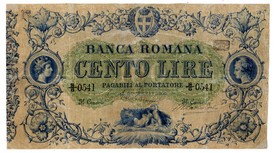 At that time, the Italian economy was still focused on latifundium, where few persons had money and also the availability of capital was much lower than other European countries, like Britain, France and Germany, where the Industrial Revolution was already started. The necessary potential for the economic development was really scarce and concentrated in the hands of a small group of capitalists, operating above all in the north of Italy or sometimes in the Centre. We have to think that, in 1878, the shareholders of the 155 greater banks (who had a nominal capital exceeding 100.000 lire) were about 30.000, but only 4.580 subscribed shares for more than 10.000 lire and only about 450 of these were present in more than one company. A factor that gave vitality to the sleepy Italian banking system was the creation of institutes specialized in mobile credit. Following the example of the French Credit Mobiler, in 1863 were established in Italy the General Company of Mobile Credit and the Italian General Bank, with the function of deposits, loans and investments banks. 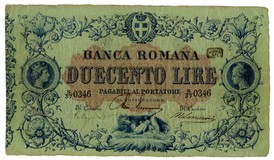 The prospect of a vast new market, not accommodated by the financial services of old banks, made possible the arrival of foreign capitals in Italy, favoring the expansion of credit institutions, such as the Bank of Discount and Sete of Turin and the Credit of Turin. While traditional banks were accustomed to the usual financing of the commercial development, the mobile credit institutes were more directed to the speculative aspect linked to the building expansion of cities, to the growing needs of industry and infrastructures and to financial transactions.The activities of these institutions were differed from those held by common banks as they collected the credit destinated to operations in anticipation and discount, following also the careful management of its customer patrimony. The common banks, instead, engaged the liquidity in activities of risk as the real estate speculation, the buying and selling stocks and shares, bonds and any other type of financial investment. This situation created the conditions that gave origin, in contemporary language, to the "economic bubbled", inflated by the immobilization of large amounts of capital used in building trade. This fact occurred because, even if the loans were granted on paper to builders throught immovables, credits were not quickly convertible into cash and when investors wanted to be reimbursed, there was not always the cash availability. 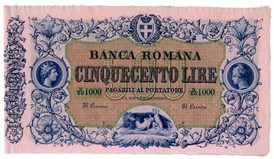 The financial crisis, caused by the collapse of the Vienna Stock Exchange in May 1873, had repercussions on all major European exchanges and also in Italy, causing the withdrawal of the most part of foreign capitals engaged in Italian companies, with heavy consequences for the new mobile credit institutes. In a few months, the banking system crisis spread also in United States where, on September the 18th, failed the Jay Cooke &Company, one of the major American banks, involved in the construction of big railway lines and of the building sector, in long-term investments not able to tackle reimbursement claims. The Jay Cook was an investment bank, as well as the Lemon Brothers: its collapse had a devastating impact on American and international financial system. When in Italy the first negative results of financial speculation were added to the strong lock-up of the building sector, mobile credit institutes adopted the system to support companies, to which they gave credit, buying their shares. The news about these interventions originated a lower confidence in financial market, causing the fall of shares on the stock exchange. After the lack of confidence spread from the stock exchange to investors, who began to claim the repayment of their deposits. 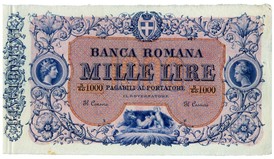