The birth of the medal - Moruzzi Numismatica Roma

The birth of the medal 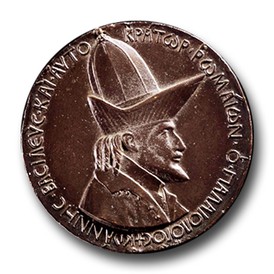 The word "medal" appears for the first time in some Tuscany texts of the thirteenth century, but it hasn't a corresponding term in classical Latin. To this word was attributed the meaning of "ancient coin" or "coin out of circulation". The antiquarian Enea Vico wrote in his "Discourses" that the term "medal" was simply a title of "greater dignity" to refer to the "coin", although - he adds - there were others believing that bronze coins were made to be donated. For everyone the term "medal" continued to be the corresponding Latin term of "nummus", that is coin. Nowadays scientists call with the term medallions these monetary objects of the Roman era  with large size. The real modern medal, as well as today we consider it, was "invented" by Victor Pisano, better known as Pisanello, a painter from Verona who in 1438 casted a bronze medal of the emperor John VIII Palaiologos, when he visited Italy to ask for military aid against Turks. Pisano wasn't an engraver and so he created models in wax - a material easily to work - giving really importance to his drawings. So his works were fusions; he obtained moulds from wax and with them he created bronze medals through the casting process. Among other things, this technique allowed to create objects with dimensions and measurements superior to the traditional coinage using the technique means of the time. Only much later was used again the coinage technique  - that is the practice used for coins production - already employed during the Roman era to produce medallions.

Pisanello is not only the first, but also one of the greatest medallists of all time; in his medals, he celebrated the Italian courts rulers: Gianfrancesco and Ludovico Gonzaga, Leonello d'Este, Sigismondo Pandolfo, Novello Malatesta and Alfonso V of Aragon. The portraits in profile of the powerful of his era appeared on the obverse as in Roman coins, while on the reverse there were allegorical scenes or evocative symbolic figures. In addition to these representations, there were slogans, symbols and various attributes, according to the celebrating programme - learned, concise and never rhetoric - that made each exemplar a true masterpiece. In these coins is evident the artisan pride of Pisanello, who put his own "signature" OPVS PISANI PICTORIS. His medals had a great success, thanks to the finely measured union between idealization and realism. Pisanello was the first and perhaps the greatest Italian medallist but, even before his death, there were many great artists who followed in his footsteps: the medals could be reproduced easily and they also acquired a similar function as the present photos; well-off people aspired to have portraits of this kind. The taste for medals rapidly spread and it is still alive nowadays. With the casting process, are minted and produced medals both to commemorate characters and events and to remember the many events of man. Many of them have an official character as they celebrate popes and kings, scientists and illustrious men, events and ceremonies. According to the modern historian, the great importance of medals consists in the iconographic appearance and in their nature to remember public events.