The coins of the Italian Republic - Moruzzi Numismatica Roma

The coins of the Italian Republic 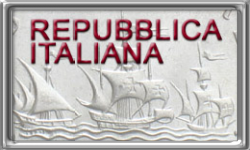 Come to see all the coins of Italian Republic making the searches you want or visit directly the category you are looking for clicking the links below. Happy search!

A symbol for the Republic
May the 5th 1948: at the end of a creative route  - that lasted twenty four months, two public competitions and a total of 800 sketches, presented by about 500 citizens, including artists and amateurs) - the republican Italy obtains its emblem.The event begins in October 1946, when the De Gasperi's government establish a special Commission. A national competition - based on few guidelines - is advertised and  opened to everyone. The guidelines are: the rigorous exclusion of party symbols and the insertion of the Italy's star.
341 candidates take part at the first competition, with 637 black and white drawings. The five winners are invited to prepare new sketches, but this time following a specific theme imposed by the Commission: "a towered boundary with the shape of a crown", surrounded by a garland with fronds of the Italian flora. The representation of the sea at the bottom and the Italian gold star above. Finally, the words UNITY and FREEDOM. The Commission choose the sketch by Paolo Paschetto, who receives the task of preparing the definitive drawing. The drawing is forwarded by the Commission to the government to be approved. It's February 1947: the emblem seemed to be realized, but the goal is still far-away.
However, the government doesn't like the emblem and it's appointed a new Commission that advertises through the radio a second competition. Unfortunately there is any trace of this second competition in the archives. However the examination of some letters suggests that the purpose of this competition was to favour a symbol related to the idea of work.
The winner is again Paolo Paschetto; his project is subjected to further alterations by the Commission members. Finally, the proposal is presented to the Constituent Assembly that, despite the many contrasts, approves it during the setting of the 31st of  January 1948. Completed other fulfilments and established the definitive colours, we get to May the 5th: the President of the Republic Enrico De Nicola signs the Decree no. 535, which gives to Italy its symbol.
The emblem of the Italian Republic is characterized by three elements: the star, the cogwheel, the olive and oak branches. The star is one of the oldest objects of our iconographic heritage and it was always associated with the Italy's personification. The star is always represented on the head of Italy where it shines brightly. It was represented in this way during the Renaissance's iconography. It appeared like this also in the famous device of the United Reign (the famous big star) until 1890. After that the star characterized the first republican honour of the reconstruction- called the Star of Italian Solidarity - and today it still represents the membership to the Armed Forces of our country. The steel cogwheel, a work's symbol, translates the first article of the Constitution: "Italy is a democratic republic founded on work". The olive branch instead symbolizes the desire of peace in the country, both in the sense of internal harmony and international brotherhood. Eventually the oak represents the strength and the dignity of the Italian people. The both symbols are expression of the most typical species of our arboreal heritage.