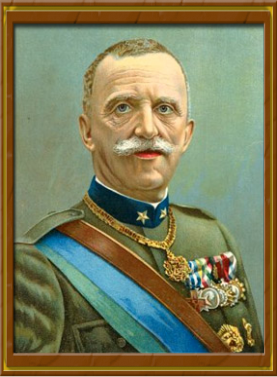 The third King of Italy ,Victor Emmanuel the III, was born in Naples in November the 11th  1869. After the assassination  of his father, Humbert  I - that took place in Monza - he arose to the throne on July the 29th 1900. The first years of his Reign were considerate one of the best periods of the Italian history, both economically and socially. Young and opened to the new century, he was able to understand the ability of the statesman Giovanni Giolitti who ruled the chair of the council until the War Word. Being in favour of the entry into the War, he reached the front the same day of the war declaration against Austria. He stayed there until the end of the conflict  appointing his cousin, Duke of Genoa, Lieutenant of the Reign. After the defeat of Caporetto, he personally convinced the allies at Peschiera - who wanted to retire on the Po - to resist on the Piave line. After the defeat of Austria, already in November 1918, he visited Trieste and Trento, joint again to Italy. The troubled years of the post-war period originated a serious economic and political crisis that struck the whole Europe and Italy too, with clashes, protests and street violence. The Italian political class was unable to face the crisis. In October 1922 the King was over a barrel for the resignation of the Prime Minister Facta whose government was the third to fall in 10 months. Moreover the military leaders advised against putting to the test the army on the occasion of the march on Rome. Only when the hypothesis of a Salandra-Mussolini government brought down, the King gave the task to Mussolini to launch a government coalition. Unfortunately, the attempt to maintain Fascism inside the Parliament failed in 1925, with the establishment of the Regime. Finally the defeat in the Second World War induced the King to put end to the dictatorship. With the armistice of September the 8th 1943, the King and the new Prime Minister left Rome in order to avoid the capture by Germans. They reached the region of Puglia, the only territory still commanded by the Italian administration. After appointing his son Humbert General Lieutenant of the Reign, on June the 5th  1944 he retired to private life in Naples.
In May 1946 he abdicated the Throne and went into exile in Egypt, giving to the Italian people the Italian collection coins (one of the greatest in the world, being inestimable), that he created in more than 60 years of study and research. He was a man with a complex personality but with a great culture. Nowadays he represents a point of reference, due to his work "Corpus Nummorum Italicorum", for the numismatic science not only Italian. He was buried in Alexandria, where he died in 1947.
Franco Ceccarelli