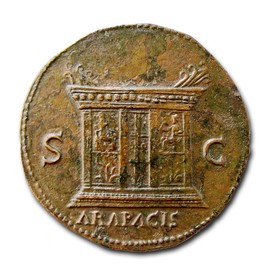 "When I returned to Rome from Spain and Gaul, during the consulship of Tiberius Nero and Publius Quinctilius, after completed successfully the pre-established programs, the Senate decreed that my return was to be consecrated with the Augustan Peace altar near Campus Martius and it ordered also that judges, priests and Vestal virgins did every year a sacrifice on it". Augustus describes with these words, in the Res Gestae (12), the Senate will to build an altar dedicated to Peace, after the exploits he completed at north of the Alps between 16 and 13 B.C. (including the ultimate control of the Alpine passes, the visit to the pacified Spain at last, the founding of new settlements and the imposition of new taxes). The altar dedicated to Peace was placed, not coincidentally, at the centre of the vast plateau where traditionally took place military and cavalry manoeuvres and, in more recent times, gymnastic exercises of the Roman youth. This monument is one of the most important examples of Augustan art and it symbolizes peace and prosperity achieved as result of Pax Romana. The dedicatio took place on January the 30th of 9 B.C. It was an important day because on this date falls the birthday of Livia, the princeps wife. 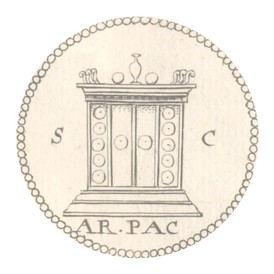 The building was located in Campus Martius just round Via Flaminia and near the great square of Horologium, the huge solar clock between Parliament Square and St. Lawrence at Lucina one. The same Egyptian obelisk - used as indicator arm (now in Montecitorio square) - on September the 23rd of each year should point its shadow towards the Ara Pacis entrance in order to remember the Augustus date of birth. Already represented on coins of Tiberius dedicated to Divus Augustus Pater, the Ara Pacis also appears on some Nero's issues: the coinage is visibly of modest workmanship, not treated in detail as the Tiberian series, but the legend ARA PACIS leaves no doubt about its identification. With this issue, Nero probably wanted to remember not only the same Augustus, but also his dynasty - the Claudia one - present and represented through its most important members on the side friezes of the outer enclosure of the same Ara. On the frieze of the south side, remained intact, we can see evidently Augustus and the great representatives of the imperial house arranged in a row, according to a precise hierarchy order of descent. At the time of the monument dedication, in 9 B.C., as Nero was not yet born, only the paternal grandparents are represented: there are Antonia Major, L. Domitius Enobarbus and their children, Domitia and especially Cneus Domitius, the Nero's father, who died when he was about 3 years old.