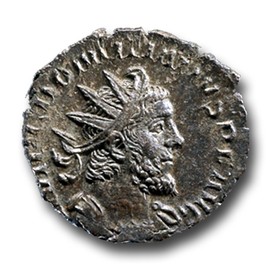 Domitian? Who was he? Who wanted to promptly  answer: "Domitian was a Roman emperor of the Flavia dynasty and he reigned between 81 and 96 A.D." would make a solemn blunder as this Domitian has absolutely nothing to do with the more notorious and famous Titus Flavius Domitian (Titus Flavius Domitianus), Vespasian's son and successor of his brother Tito. Even today this mysterious character presents himself on the history stage as an evanescent figure, with a vague and undefined profile, so enigmatic and intriguing. We know that he was surely an usurper of the imperial power within the breakaway state said Gallic Empire, that had autonomous life between 260 and 274 A.D. (including the Gallic, German, British and Iberian provinces removed from Roman Empire after a military mutiny at the time of Gallienus, when took place convulsive civilians struggles). 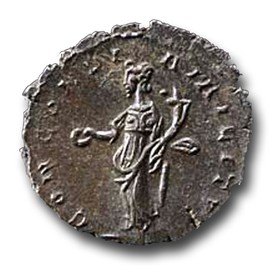 If the existence of this historical figure came to our knowledge, we have to thank above all the numismatics. In fact, except two ancient historical sources that present him as a high-ranking military - we only know Domitian due to its coins. In fact Brian Malin - a dash and enterprising young Englishman - in 2003 through the metal detector unearthed in Oxfordshire a pot full of roman coins. Among them, there was just an antoninianus of our usurper, of which we knew only another identical exemplar, found in Haute Goulaine, in France, 103 years before, but considered as a fake by some experts. It's obvious that numismatics, through the importance of this discovery, opened historical perspectives that previously were unimaginable, confirming beyond doubt the effective existence of the mysterious Domitian. This figure has finally acquired not only a concrete and real dimension in the course of history, but he even found a face: the only two coins existing - until now - gave us the image of a bearded and aristocratic emperor. 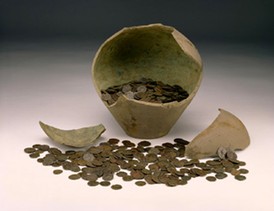 Obviously this latter finding raised a considerable enthusiasm among the experts, arousing at the same time the attention of non-experts and collectors. This happened especially after that the "conservator" experts of the British Museum urged all collectors to verify carefully if among their coins there was any Domitian one, which could make them very rich and - if it's true that money brings happiness - very, very happy! The "Domitian case" is really emblematic and it gives us an account of the eternal fascination of collecting coins: in fact, the collector does not limit himself in searching, finding, buying and classifying coins - it would be banal. He does not limit himself in contemplating, touching and gazing pleased at them. Inevitably he is never satisfied: unconsciously he is more or less in the eternal search of "I would but I can't", of the rare exemplar, of the very rare and unreachable one, of a new Domitian coin. Frequently he thinks "I could but I don't want" because maybe his wallet does not allow him this purchase, but luckily he can always cheer up thinking excited "I can and I want". Inevitably he discovers himself as historian, he becomes a connoisseur of art and antiques.

He falls inevitably in love with his coins and also with those not belonging to him and - like all lovers - he becomes idealistic. For this reason he can cultivate also impossible, unreachable, utopian loves ...... and sometimes, as  the "Domitian case" teaches us, impossible loves can become real .... and even profitable. Even if today it could seem incredible - in our disheartened and disenchanted hyper-technological era - is not foolish thinking and dreaming that in the little box full of old coins belonged to the father of our father (that we relegated in the cupboard among many odds and ends) just a Domitian coin is really spleeping… A coin about we did not suspect the value, giving so lustre to a collection otherwise modest!  However, the most idealistic of numismatic lovers doesn't dislike the idea that his collection, carefully built over many years, and often over his life, at the end can also be - why not? - a good economic investment.