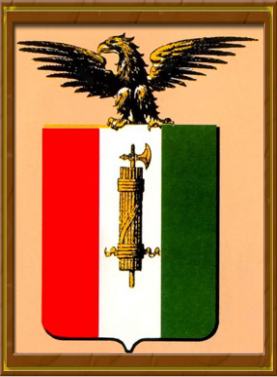 After the armistice of September the 8th 1943, the German troops already in Italy, (reinforced by those rushed after the fall of the Fascist Regime the previous 25 July), in few hours succeeded to take full control of the Italian territory not occupied yet by the Allied troops for the almost complete crumbling of the Italian Army. They didn't take control of some provinces like Taranto, Brindisi, Lecce and Bari that always remained under the national control. On September the 12th, a German commando released Mussolini - imprisoned in a hotel in Campo Imperatore, in the region of Abruzzo - leading him to Germany. Here, giving way to Hitler pressure, he started to work for the reconstitution of the Fascist Party.  As a result of this, on September the 23rd 1943, Mussolini announced the birth of a Republican National State, that would have continue the war alongside the old ally. The new entity - to all intents and purposes a "puppet" state entirely controlled by Germany - had jurisdiction over all Italian territories still controlled by Germans, except for the provinces of Trento, Bolzano, Belluno, Udine, Gorizia, Trieste, Fiume and Pola, directly administered by Germany. Besides, some armed forces were reconstituted. However they were mainly involved, with due exceptions, in facing the partisan warfare, in particular the Slavic-Communist one on the eastern frontier. The continuation of the war - with the consequent and unstoppable allied advance to the north - in a few months reduced the territory controlled by the Republic of Mussolini, minimizing it only to the Po valley in the spring of 1945. At the end of April 1945 - with the arrival of Anglo-Americans supported by the popular risings throughout the North - the ephemeral Fascist state ended with the execution of Mussolini at Dongo. However the Italian Social Republic had some merits. It prevented Germans from proceed through the methodical pillage of the Italian industrial heritage - as it happened in other states -  guaranteeing a rapid recovery during the post-war period. It ensured also that in the northern provinces the lira could still have a sense as a currency, compared to the inflation explosion caused, in the south, by the invasion of the unfamous "AM-liras".
Franco Ceccarelli