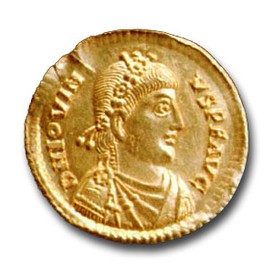 A rare solidus of the Emperor Jovinus has been discovered this year in the English Kent countryside by a passionate searcher of antiquities. It was recently offered for sale in London at an auction at Sotheby's - Morton & Eden and purchased by the Moruzzi Numismatics of Rome. The event aroused great enthusiasm among the experts of the British Museum, who first examined the coin to certify its authenticity: the solidus of Jovinus, known only in some exemplars, is the only found on English soil until now. The reign of Jovinus had ephemeral life. During the reign of Honorius, Jovinus tried to be proclaimed emperor by a coalition of peoples residing in Gallic territory. Here he kept the power from 411 to 413 A.D. until Ataulf, king of  Visigoths and ally of Honorius, captured him. Finally he was executed in Narbonne.
The Annals of Ravenna remind the arrival in the city of the cropped heads of Jovinus, of his brother Sebastian - whom he appointed co-regent - and of another brother named Sallust on August the 30th of that year. 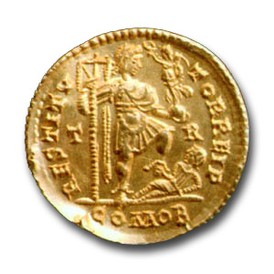 We want to underline - in addition to the exceptional nature of the exemplar in question - that we bought the coin, previously examined and studied by the experts of the British Museum, with a free movement certificate and it was declared free of government restrictions, as it is already present in the rich collections of the British Museum. The splendid exemplar was discovered at the beginning of 2004 in the English Kent countryside by a policeman passionate of ancient history. Helped by metal detector that, until then, he was able to collect just few old pennies of Queen Elizabeth the II and few coins of George the III. This event changed the fate of the discoverer, who was just going through a period of economic difficulties. The exemplar in question, estimated for 7.000,00 pounds, was then awarded for the considerable sum of 16.000, 00 pounds!
The finding, important both for its historical significance and numismatic value, is a rare example (that we hope will not remain isolated) of  collaboration between Institutions and passionate experts of these disciplines. If you want to know more