The first notes appeared in China, which has a long tradition in issuing paper money. In 812 A.D. the Chinese empire temporarily used something similar to banknotes to face the shortage of copper, the metal used to mint coins. These first notes were coins bank receipts. They were used just for few years. Only a century later, in China were issued exchange notes, which were much more comfortable than heavy metallic coins. The state didn't issue these notes; they were minted by some important families, who acted as guarantors. These notes were spread so much that they became the support of the state economy. During the Sung Dynasty, for the first time the state decided to regulate the issue of paper money.The first Chinese note that we received is the 1000 cash, issued under the Ming dynasty during the Great War (1368-1398). The Cash was the first note that guaranteed the payment on sight at any time. Marco Polo (1254-1324) reported from China the news about the use of paper as money. In Il Milione, Marco Polo tells us that the Great Khan ordered to manufacture large quantities of paper money, deriving it from the mulberry tree bark. Then he impressed his seal on the notes, that would be used for any form of payment. When paper money was worn, it was given again to the Great Khan that changed it with a new note, receiving, however, a commission of 3%. 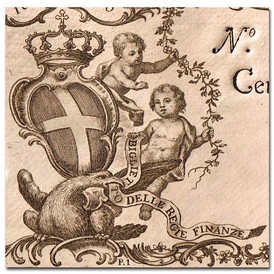 Despite this fact paper money was used in an European country just after other 300 years. In 1438, in Spain was used a kind of paper money - that a commander used to pay his army during a Moors siege because of the cash shortage - but it was only a momentary phenomenon. The first European banknote was issued in Sweden around 1661 by the bank of Johan Palmstruch. At that time, there was a shortage of metallic coins because copper coins stopped to circulate, as their intrinsic value exceeded the nominal one. The state was unable to mint non-noble metals coins in large quantities. The banknote issued by Palmstruch was named Daler and was produced in various denominations. These first notes had all features that we can still find in current paper money, such as serial numbering, signatures attesting the guarantee of reimbursement and security measures against falsifications. Palmstruch realized that people needed an easy method of payment, surely different in relation to the complex negotiable instruments of the time. The success of his notes is due to this intuition, joint to the shrewdness in the management of his bank. The king and his officials began to ask for substantial loans to the bank, giving as guarantee only their arrogance. The scandal broke out when the news about the insufficient coverage for all notes began to spread. Palmstruch attempted to obtain a reimbursement from state of the various contracted debts, but he got only the permission to devalue his notes by 8%.

In 1666 the bank closed and Palmstruch spent in prison the last four years of his life. The first Italian banknote was issued in 1746 by the Royal Finances of Turin. The first issue of banknotes corresponded to a total of 4.000.000 lire, issued according to the Royal Decree of September the 26th 1745, which motivated the introduction of notes whose goal consisted in "facilitating the benefit of the public Trade". After followed others decrees establishing the rules about the falsification of banknotes and determining that notes had to circulate in the same way as cash.