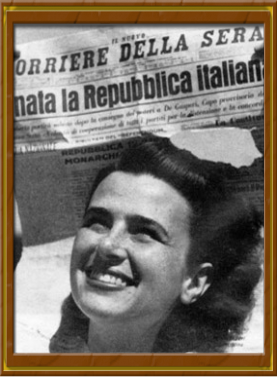 Born, in fact, on June the 13th 1946, when the King Humbert II left Italy going into exile, following as a consequence to the sudden assumption as Head of State by the Prime Minister of that period - Alcide de Gasperi - the Republic, although suspicious, disputes and appeals, represented for many Italians a hope of renaissance and, above all, a break with the recent past that had plunged the Country into the abyss of the war. The first years - even if difficult for the heavy economical and social situation caused by the conflict - were characterized by a very strong desire of rebuilding. When the most violent political passions were soothed after 1948 - and when the shock for the non-small portions of the national territory ceded to France and Yugoslavia was absorbed as a result of the heavy Treaty of Peace of 1947 (which also deprived Italy of its colonies in Africa) - January the 1st 1948 the new Constitution came into force. The Country definitely took sides with the Western bloc, starting an apparent really hopeful future. The 50s and the 60s saw an exponential economical development: in a short period the economy, maybe driven by a too rapid industrialization, changed the face of the Country. Important migratory streams, largely from the depressed southern regions and islands, determined the displacement of huge population masses to the northern regions. This originated a significant improvement of standards living of the population. Besides, the agrarian reform of the 50s, in addition to the constant improvement of the welfare and health services, guaranteed a general growth of the welfare.
After this period, at the end of the 60s, the country felt increasingly the heavy signs of the crisis. At the beginning of the 70s, the first major oil crisis showed how vulnerable the economy was in the Country. Serious social problems appeared too; they characterized above all the youth world, with extreme events that degenerated into terrorism forms, even violent, both of right and left part.
The 80s were characterized by an improvement of the economic situation - more apparent than real - mostly paid with an exponential increase of the public debt, a phenomenon that even  nowadays penalizes the Italian economic situation. The political crisis of the 90s determined a "replacement" of the political class and the insurrection of the first signs of "intolerance". Especially in the North there were these signs against a State excessively centralized, with the consequent emergence of new political groups of strong federalist inspiration. This situation originated a need for attentive reforms - even at the constitutional level - that, in its various aspects, characterized and is characterizing the current political situation of the Country.
Franco Ceccarelli