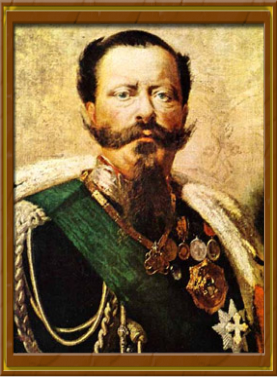 Victor Emmanuel the II was born in Florence in 1820; the eldest son of  Charles Albert of Savoy Carignano and of Maria Theresa of Hasburg-Lorraine.
His father became king in 1831 and assumed - as crown prince - the title of  Duke of Savoy.
In 1848-49 he actively participated in the first unlucky war of independence against Austria, after which the defeated Charles Albert abdicates, and went into exile in Portugal. Even if during a difficult political moment, the new king, still very young refuses to revoke the Constitution granted by his father only a year before, despite the pressures of the Austrians winners. After that he gained the love of the people that, from all over the Italy, already at that moment claimed the independence of the Peninsula. After that he entered by right with Cavour, Garibaldi and Mazzini in the group of those who have to  be considered, in all respects, as the "Fathers of the Italian Country".
In 1852, entrusting the government to Cavour, he made another lucky choice during his reign. He started a collaboration that, with ups and downs, would end only with the death of the Piedmontese statesman in 1861. Even if indirectly in 1859 he supported Garibaldi's Expedition of the Thousand and  he was also successful in bringing back many mazzinians back into the monarchical constitutionalism.
On March the17th 1861 the Parliament, proclaiming the birth of the Italian reign, nominated him first king of the new Unitary State.
In 1865 he had to sustain for political reasons the transfer of the capital from his loved Turin to Florence, where he remained only for few years. He  tried to confirm Rome in 1870 as the definitive capital of the new State and, as a  consequence of this, he also had the courage to face the barbs of the papal government that excommunicated him.
He was a man with a complex character who had, however, the intelligence to lead with cleverness the transition from an autocratic system to a constitutional one. In 1878 he entrusted the government to Depretis, giving the power to the "left". When he moved officially to Rome on July 1871, he lodged at Quirinal where, as a man who had absolutely simple tastes, he wanted to live in a room on the ground floor without any comfort. He died young on  January the 9th 1878 of a bronchopneumonia, assisted by his son Umberto, crown Prince of  Piedmont, and by his second morganatic wife. He was buried in the Pantheon of Rome by  popular will. Since then the Pantheon became the official chapel of the united Italy kings.
Franco Ceccarelli