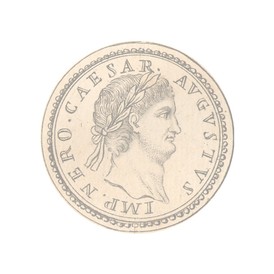 When the doors of Janus temple were closed ...

Janus is the god who looks inside and outside, who looks at East and West, the past and the future. For this reason its representation has two opposing faces, from which derive the various attributes of biceps, biformis, ancipiti imagine, duplice imagine, gemina facies. Janus founded the city which he called Gianicolo. His kingdom was happy and full of peace and for this reason he was later honoured as god of peace. The writer Macrobius - lived in the fifth century A.D. - attributes the origins of the cult of Janus to the Sabine war. During the war the enemy, entered in the city through Porta Janualis, was overwhelmed by a torrent of boiling water, which suddenly came out from the temple of Janus. For this reason, it was decided that during the wars the doors of the Janus temple had to remain open, so that the god could come in aid of people at any time. 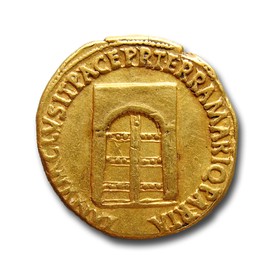 The Janus cult is associated to the Quirinus one. Sometimes, this cult is indicated with the name of Janus Geminus. This name was given to the oldest sanctuary of the god, which was at Infimum Argiletum, in Rome, containing the famous biceps statue of the god. It became famous for a ritual that the tradition associated to a law of Numa (Numa ... Ianum ad infimum Argiletum indicem pacis bellique fecit..., Titus Livy I, 19, 2). This ritual consisted in the opening or closure of the temple, respectively in war or peace events. This rite originated two versions: the most common one presents Janus as guardian of peace, locked up in his sanctuary (Ovid F. I, 281: "Pace fores obdo, ne qua discedere possit" and Horace, in Ep. lI, 1, 255, expresses the same concept). The other version, instead, is the poet Virgil one, who imagines the War locked up in the temple, under the supervision of the god. Both interpretations justified the epithets - of Patulcius and Clusius - attributed to the deity. 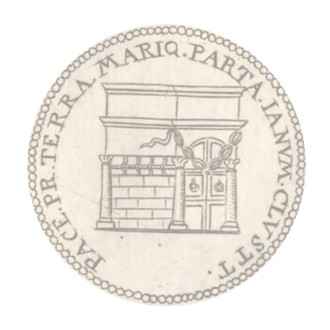 The temple of Janus

The exact location of the temple is uncertain, although it is usually placed at Argiletum, near the Basilica Aemilia. The ancient sources have discordant opinions. The historian Livy, in fact, puts it at Infimum Argiletum, the poet Ovid between the republican forum and the Caesarean one ("hic ubi iunctaforis templa duobus habes", F. I, 258), and Macrobius at the foot of the Interior Ministry. The only images of the building - disappeared without leaving any trace - are reproductions printed on some coins of Nero, who celebrated the end of the sanctuary with a series coin issued by the mints of Rome and Lugdunum. It's amazing that neither god nor his church appear in the monetary iconography of the first emperor. Augustus, even if he enhanced in the Res Gestae the closure of the Janus temple, does not include its images on coins. Its representation cannot be replaced by the image of the Pax, reported in some issues: Pax was too frequently recurrent on different coin types without a real correspondence with this state of affairs. We have to distinguish between this sanctuary and the other temple of Janus, which sources place iuxta Theatrum Marcelli, built by C. Duilium during the first Punic War and restored by Tiberius in 17 A.D.  The oldest and most important shrine of Janus, closed on rare occasions when the empire was at peace, consisted of two arches joined together by a wall. The biceps statue of the deity was placed in the middle of the passage, which probably was an ancient city gate. 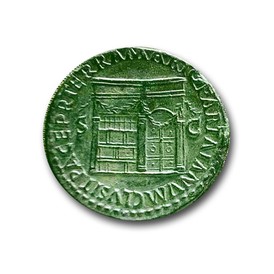 The representation of the Janus temple on coins

Janus, native roman god since the origins, did not receive any inscription neither in Rome nor in Lazio, where he reigned during the good times of the golden age. He does not appear in the official monumental sculpture, neither represented by himself nor in company of great emperors or gods. However, Janus and his temple occasionally appear on the reverse of coins or medallions minted in Rome. The political, religious, historical and commemorative mean of these representations varies from one issue to another. It varies depending not only on the circumstances, but also on the same versatility of Janus, god of peace and war, of chaos and sky, of sunlight and time. Sometimes god is celebrated in monetary iconography in periods that do not coincide with times of universal peace. "Absences" are also significant, where instead we would like to find a reference, an allusion. The closure of the Janus temple is illustrated by the Nero issues, but not by  Augustus, Marcus Aurelius and Gordian the III ones: these emperors, instead, closed in a symbolic way the War (or Peace) behind the heavy bronze gates. As we know, the two-faced god has no place in Augustus coinage, neither in Tiberius and Caligula ones. Any source reports the closure of the temple during these two reigns, even under Claudius. The  Claudius taking of power coincided, or at least could coincide, with the tercentenary of the temple of Janus, built in the forum in 260 B.C. by C. Holitorium Duilium. Among the embodiments that inaugurate the series of Claudius denarii and aureus in 41-42, there is the Pax Augusta. The reverses with the inscription PACI AVGVSTAE would then remember that the dawn of a new era of peace corresponded to the three-hundredth anniversary of this consecration in the Holitorium forum. Nevertheless, it is not the closure of this temple, but the closure of the Janus Geminus one to mark the Peace. 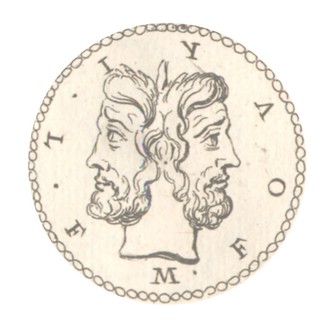 Some Nero coins commemorate the closing of the Janus temple, after the victory of Corbulo. The aureus simply represent, without infusing any depth to the image, the rectangular front of the temple with double doors, following a flat front and almost abstract. Instead asses, dupondius and sesterces represent the temple of Janus in perspective, represented in three quarters, with the door now turn to the right, now to the left. The shutters, equipped with two large rings, are divided into three sections. These are the famous bronze doors about which Virgil and Procopius often speak. Often a semi-circular wreath marks the lintel. On the side front other wreaths, arranged in a visible manner to the left of the entrance, mark the upper or below limit of a flowering tendril frieze. Above this floral frieze, a kind of attic bears an elegant decor of palms, crowning the whole building. The only reference we have is the Procopius one. He describes the temple: it was all of bronze, with square form and big enough to cover the two-faced bronze statue of god. All experts agree with description that reflects very well the image provided by coins. 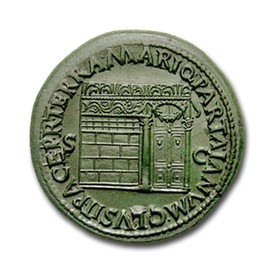 Meaning of the representation of the temple on coins

In the general policy statement - written by Seneca after the accession to the throne - Nero underlines the atmosphere of serenity characterizing the beginning of his reign, even if he wants to inspire himself to the brightest examples of government supplied by Augustus. No civil war, no internal conflict, no hatred or rancour.  The closure of the temple of Janus consecrated the protectorate of Rome in Armenia. The legend PACE P(opuli) R(omani) TERRA MARIQ(ue) PARTA IANVM CLVSJT echoes the expression of the Res Gestae. Some asses and dupondius, however, bear the legend PEACE VBIQ (ue) PARTA, which highlights the concern of glorify the imperial peace as universal. This variant wants also to make unique the closure of the temple, which in 66 had the fortune to be realized 300 years after the only attested in the republican era in 235 B.C. The coins commemorating the event were minted from 64 and many other from 66 A.D. It is difficult to find an accord between the sources - which speak about the closure of the temple in 66 A.D. - and the coin issues , in which the temple of Janus began to appear since 64 A.D.  The historian Suetonius places the closing of the Janus Geminus temple immediately after the coronation of Tiridates in Rome, which probably took place in 66 A.D.: "ob quae imperator consalutatus, laurea in Capitolium lata, lanum Gemi num clausit, tam nullo quam residuo bello".  Suetonius states that the closure occurred in 66 A.D., while the first coin series were minted in 64 A.D. 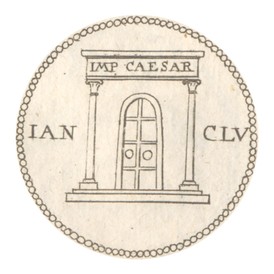 Mattingly believes that the ceremony was formally repeated in 66 A.D.,  after it was originally celebrated in 64 A.D. According to the author, in fact, Nero had the urgent necessity to reassure the public opinion by every possible means, worried after the fire of Rome. According to Grant the coinages of 64 A.D. would announce the closure of the temple, postponed by Nero in 66 A.D., coinciding in this way with the third anniversary of the first closure which fell exactly in that year and noted by T. Manlius in 253 B.C. Probably coins spread the image of the Janus temple with closed doors and  with the legend IANVM CLVSIT, so that the public opinion expecting the peace will be positively influenced. The imperial propaganda, also implemented by coin types, often advertises and anticipates the events. Therefore we can affirm that this is our case: Nero enhanced again and repopulated the cult of Janus in favour of peace, but he expected the year 66 A.D. to solemnize it with an official commemoration. The definitive closure of the temple maybe happened in 64 or 66 A.D., but the ceremony was intentionally postponed to follow and to conclude the visit of Tiridates, as tribute and recognition of submission to the universal monarch.